This was a liquid filled combiner design that we believed was filled with gin! The liquid was index matched to the glass so that it acted like a solid block but of course of lighter weight.

The vertical field of view of a HUD can be extended by the addition of a second Combiner Glass forward of the first glass and extending higher up. The optical system then provides an IFoV with a second but smaller double circular field above the first. Now, the image has to transition from the aft glass to the forward glass in a smooth manner and this done by using graded optical coatings. Thus the coating on the aft glass reduces in reflectance at the top as the forward glass coating increases in reflectance and the transmittance, of course, does the opposite. The F-16 AFTI HUD Combiner achieved a small improvement in the vertical FoV by using a very thick Combiner glass allowing reflection of the forward inside surface. The ultimate "thick" Combiner was a liquid filled version.

This concept was extended with various `Venetian blind' designs such as the Multi-Combiner of 1979 which contained four reflecting surfaces within a glass block. Each surface had a different reflectance in order to produce near constant display brightness and outside world transmissivity. The azimuth field of view was not increased but the vertical field of view was increased such that within a 20° circular FoV the azimuth was 16.5° and the elevation 17°. As the portholes produced by each reflecting surface are not circular the individual elements of the collimating system were considerably truncated. Overall the IFoV was almost rectangular. Light is refracted into the Combiner so that there is no need for a Fold Mirror giving a system which was light and very shallow.

Another idea was to combine a Head Down Display beneath the Multicombiner HUD where it was called an "Eyes Down Display" or a "Chin Up Display". 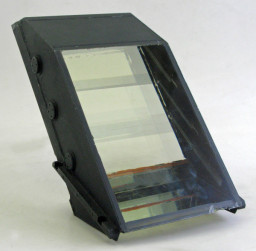