This item was acquired in 2007 from Gt Baddow. It is a prototype assembly of combiner elements for the LANTIRN HUD and was possibly made as early as 1970 before the holographic work moved to Rochester.

GEC-Marconi Avionics began development of diffractive (holographic) optical elements in the late 70’s building on the work of the Marconi Research Centre at Great Baddow under Dr Firth. A clean room was opened at Rochester in 1987 to carry out research and to manufacture holographic elements. It has an optical bench going down to bedrock to minimise the vibrations from the nearby motorway!

The Company developed a diffractive optical system using three combiner elements which gave a large Head Motion Box. The F-16 Multinational Staged Improvement Program MSIP was the planned upgrade of the F-16 beyond the F-16A/B configuration. The F-16C (single seat) and F-16D (two seat) are improved versions of the 'A' and 'B' and would have the latest cockpit control and display technology. The initial version of MSIP included provisions for a wide-angle raster (WAR) HUD in its Stage 1. It would display a FLIR-generated image to the pilot to support manual low-level flight at night This WAR HUD became known as the LANTIRN HUD as the Air Force plans for a FLIR system coalesced into the LANTIRN program. In 1979 a development contract was published by the WPAFB for a holographic HUD for the F-16 and A-10 which were to be fitted with the LANTIRN Pod. LANTIRN is a podded sensor system for low-altitude day/night navigation and attack, and the HUD is used to superimpose infrared images on the pilot's view of the outside world. The following year the US Air Force awarded a development contract to Marconi Avionics for a wide-angle HUD to operate with the LANTIRN Pod on F-16s and A-l0s.

The LANTIRN HUD is a holographic design, more correctly called a Diffractive HUD or DHUD; it uses the Combiner to collimate the light, eliminating the lens. The Combiner is a diffraction grating rather than a partially silvered screen. A diffraction grating has thousands of parallel lined etched on, and acts as a lens. The surface reflects light of a certain frequency, but all other frequencies are allowed through to give the pilot a clear view outside. The result is a field of view of 18° vertically and 30° horizontally compared with about 9° by 13° for a conventional HUD. By early 1981 design problems had emerged with the LANTIRN HUD and in 1984 an interim design was authorised with a wider-angle view than the HUD used in the F-l6A/B but a narrower angle view than the LANTIRN HUD; this called the  Wide Angle Conventional HUD (WACHUD) or simply the F-16C/D HUD.

The design and installation issues were resolved and the revised LANTIRN HUD was delivered in November 1983 and testing recommenced.

In 1988 full scale production of the LANTIRN or D-HUD began. Before the LANTIRN design went into production a radical change was made to the support structure for the Combiner Glass. The original version had a tie bar each side which was designed to support the Combiner assembly under the extreme stress caused by canopy loss or bird strike. However, it was found possible to produce a design without the tie bars which was equally effective and indeed looked much better.

Eventually 932 D-HUD’s were manufactured for the USAF.

The HUD PDU has both a raster and a cursive capability with the first application of ‘cursive in flyback’ in which the same amount of symbology as in the daytime high brightness mode can be drawn on the CRT using the raster flyback period of the Night mode. A good grey scale was provided for sensor video and the system could operate in 525, 625, or 875-line standards. The system accuracy was enhanced by the ability to apply corrections for the windshield. The F-16 windshield in particular acts as a lens which modifies the focus of the system and this is compensated for in the optical module design but in addition there are linear distortions away from the centre of the field of view caused by the curvature of the one-piece canopy and manufacturing variations. It is possible to provide both a generic and a specific correction for the particular aircraft. The optics provides a field of view of 18° vertically and 30° horizontally.

The Cathode Ray Tube is truncated top and bottom and has an area for deflection calibration tests. As usual the delection is magnetic and the focus electro-static: a P43 phosphor is used to give the narrow spectral emission required by the diffractive optic design. The deflection coils and the matching card were all constructed by Rank Electronic Tubes and the item is delivered as a Tube Unit Assembly.

The HUD Electronics Unit (EU) The LANTIRN Electronics Unit contains twenty circuit boards. The Processor/Symbol Generator uses the MIL-STD 1553B (Standardised Electronic Data Highway) databus architecture, the MIL-STD-1750 (Standardised Computer architecture) processor and the MIL-STD-1589A (Standardised Jovial J73 Computer language) software. This was the first time that all three Standards had been used together and the Company was way ahead of its US rivals in this respect . The foundations for the implementation of these Standards was laid down by FARL from 1978 and led to a highly successful LSI chipset for the 1553 Databus. The HUD EU has comprehensive video mixing and scan conversion and self-contained weapon aiming capability. 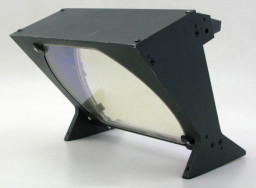 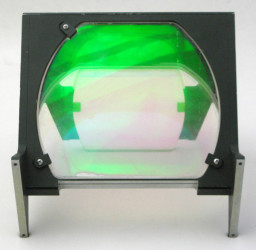