This is a 3D printed space model of LITEHUD concept with combiner glass. This model shows how compact the design had become. This is an overhead design so it should be named Q-HUDTM under the new scheme but at the time it demonstrated the LiteHUD® technology.
The Q-HUD™ utilises the same LiteHUD® waveguide as the glareshield installation, but in its inherent ‘direct view’ mode. The very high outside world transmission (>80%) coupled with almost no colour shift makes this an ideal Combiner for use in these applications. The waveguide design generates no image distortion so the flat Combiner does not introduce an additional factor when considering the overall outside world distortion performance of the cockpit windshield and HUD Combiner combination. This is especially important in today’s commercial aircraft designs where windshields are increasingly compound curved surfaces and the interaction between the differing curvatures of the HUD’s Combiner and that of the windshield must be very carefully managed.

The Project was part of the European program entitled 'All Condition Operations and Innovative Cockpit Infrastructure' (ALICIA) which addressed the objective of increasing time efficiency within the future air transport system. The aim was to develop a new and scalable cockpit application which can extend operations of aircraft in degraded conditions.

The fundamental design of HUD optics had not changed much since the early design of the Buccaneer; essentially there was a relay lens system to correct the image and a Combiner to present the image to the pilot. Of course, the diffractive optical system allowed a much larger field of view by locating the collimating element in the Combiner. However, the ‘Holy Grail’ of optical design would be to inject an image directly into the Combiner glass and have it projected, collimated, to the pilot. An even better result would be to take advantage of modern micro-electronics to put the display drive and computing all in the same box.

The approach to resolving many of the issues of current HUD design was to be found in waveguide optics and the application of a solid-state display source. Waveguide technology is a way of manipulating and controlling light using parallel sided sheets of glass that act as waveguides to light contained within their structures. It was hoped that these technologies would open up opportunities for new markets and retrofits.

After a DTI seminar in January 1998 there was an opportunity to review some innovative optical concepts using waveguide display technology within Cambridge University Photonic and Sensors Group. Cambridge 3D Display Ltd “Cam3D” was set up in January 1999 with the aim to licence flat panel projection display and optical switch concepts which use waveguides, microdisplays and laser diodes

The Company optical engineers thought that the Far Field configuration could be used in HUD designs. The target was to make a very slim HUD for the civil cockpit. In the waveguide optic collimated light from a flat panel display is fed into the end of a small slab Waveguide. The output along the length of the rod then feeds into the end of a thin Plate Waveguide. The output surface of the plate has a diffractive surface which turns the light towards the viewer i.e the pilot.

By November 2001 the concept for the Far Field had been initiated and a rather poor demonstrator fabricated. These early demonstrator designs used cut down commercial DMD projectors rather than purpose-built equipment because we had not yet negotiated the purchase and use of the DMDTM for military applications and equally had not acquired the details of the TI drive circuitry.

In a report of September 2002, the name ‘Quantum Optics’ first appeared, and the design was to become known as the ‘Quantum HUD’ or ‘QHUD™’.  The Quantum HUD optical design was granted US Patent 7,907,342 on March 15, 2011 citing Michael Simmonds and Richard Howard of BAE Systems Optical Design Team at Rochester as inventors.

By the third quarter of 2004 a development programme had been initiated with the US Defense Advanced Research Projects Agency DARPA under a Broad Agency Agreement BAA.

A number of QHUD™TM demonstrators were produced using this early technology in 2009 but there were a number of very difficult problems that prevented this design being suitable.

By the end of 2011 a new ‘Monoblock demonstrator design had been shown to Lockheed Martin at Fort Worth, Texas and was very well received. A later visit to Boeing in Seattle also gained a lot of interest. The new design HUD weighed less than 30lbs, so the marketing people decided on the name ‘LiteHUD®’.

At Farnborough International in 2014 the Company showed a ‘LiteHUD® noting again that the waveguide technology is very compatible with the large displays found in the latest combat aircraft.

Originally the name Quantum HUD was conceived and registered as Q-HUD™ with the plan for this to be the overall name for the new waveguide design. However, the military HUD has been renamed as LiteHUD® and the Q-HUD™ name is to be used for the civil transport programme for the replacement of the conventional overhead mounted HUDs in air transport and business jet aircraft.

The Q-HUD™ utilises the same LiteHUD® waveguide as the glareshield installation, but in its inherent ‘direct view’ mode. The very high outside world transmission (>80%) coupled with almost no colour shift makes this an ideal Combiner for use in these applications. The waveguide design generates no image distortion so the flat Combiner does not introduce an additional factor when considering the overall outside world distortion performance of the cockpit windshield and HUD Combiner combination.

As with LiteHUD® the drive electronics and projection optics of the new Q-HUD™ are all packaged within an integrated housing which is mounted above the closeout panels forming the cockpit ceiling with only the Combiner visible to the pilot. The unit incorporates a set of pilot operated controls for image management and interfaces to the aircraft avionics and sensors via industry standards ARINC 429 & 818 data and video formats respectively. The production variant will incorporate a mechanism to allow the pilot to stow and deploy the Combiner for easy ingress/egress as well as provide compliance with the mandatory Head Impact Criteria (HIC) requirements for new designs. The “break-away” mechanism has been designed to allow the Combiner to move away from the head under high-g conditions or with impact and will be kinematic to ensure accuracy is restored following stowage of HIC operation. The Q-HUD™ design results in a unit of such minimal size that it makes it feasible to produce a single design which is transferrable across aircraft types from the same manufacturer without modification. 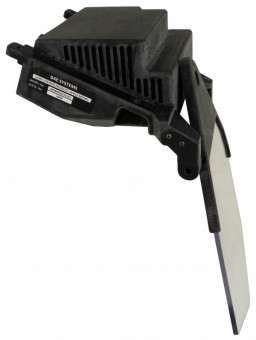