This is a fairly modern Tube Unit Assembly. The Matching Card is attached and is a printed circuit design with a flexi layer out to the connector. The CRT has no special masked areas and has a circular mounting face. The Tube unit has extended leads, probably used for testing purposes. A Tube Unit Assembly of this type was probably made by Rank Electronic Tubes and supplied as a complete item.
The part number, 229-051712-01, suggests a manufacturing date of the mid 1980s. 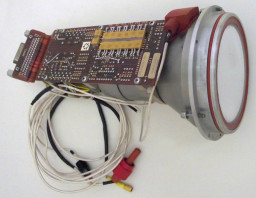