An ivory sector by Elliott Bros, Strand, London dating from between 1854 and 1880. This is very typical of nineteenth century sectors, having scales for inches, decimal feet, lines of sines, tangents, equal parts, chords, numbers (log scales for multiplication), polygons, secants. It is a six-inch size example.
Sectors were frequently included in sets of drawing instruments in the eighteenth and nineteenth centuries until made obsolete by the slide rule. There are three types of scale on an English sector: sectoral ones (radiating from the hinge centre), which were used for calculation; plane scales (logarithms, sines, tangents) parallel to the edge; and rules (inches, tenths of feet). 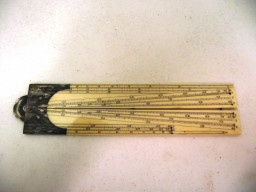 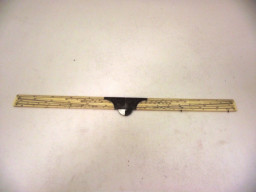