This Instrument is a Type 14 Speedometer from around 1920. It has a black metal casing with circular glass panel at the front with a dial displaying 10-80 miles per hour a four digit Odometer and what we would call a Trip setting dial reading from 0-100 miles. The inner dial is also marked in red with fractional values but it is not clear what these indicate.
The Speedometer was probably made at the Lewisham factory. The speedometers may have been for car or train, it’s not obvious, Elliotts advertised for both users.
The Speedometer was probably made at the Lewisham factory. The Speedometer was kindly donated by the late Ron Bristow in 2015 who found that they had been duplicated in the Elliott Historical Collection and Archive at the Museum of the History of Science at Oxford. The original cracked glass has been replaced

As early as 1904 Elliott Bros (London) Ltd were supplying Speedometers (sometimes called Motormeters) and in 1908 a double instrument of Speedometer and Odometer was supplied and pictures show this fitted to cars like the Rolls Royce Silver Ghost. This product was endorsed in an early RAC advertisement by His Supreme Highness Prince Francis of Teck who strongly urges fitting of a Speedometer. The advertisement goes on to say that in the 2000 mile test the British made Elliott Speedometer was the best. At a Court Hearing in 1909 Elliott Bros proved that their Speedometer was more accurate than the stopwatch used by the Police. At this time the Company advertisements show the double instrument as the ‘Universal Favourite Type 7’ and the single Speedometer as the ‘New Popular Model Type 2’. Elliotts made a range of instruments for measuring the speed of vehicles or engines and it was logical that they should make such instruments for aircraft. 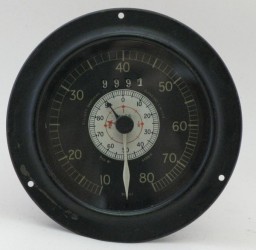