This unit is a production Platform, Serial No. 503 and was fitted to the Jaguar Fly-by-Wire aircraft. 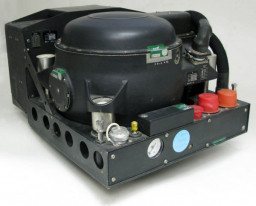