Switch Assembly from the Data Transfer section of the Control & Indicator Panel - part of the Naval Compass Stabiliser Electronics Unit.
Each upper and lower switch pair are mechanically linked so that pressing one releases the other.

Initial sea trials were carried out in HMS Antrim and the system entered service in 1977 and was accepted in 1981; it then went into later construction Type 22 and 42.

NCS1 was designed and manufactured within the Guidance Systems Division at Rochester between 1976 and possibly beyond 1984. NCS1 is likely to be in-service until somewhere between 2015 and 2035. 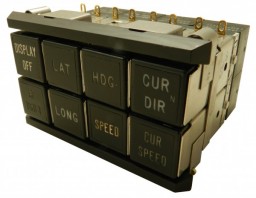 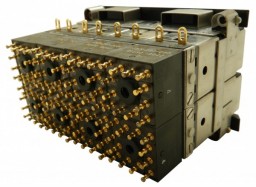