This unit drives the LCD Seat Back Displays on two seats and is the interface to the File Server.

GEC-Marconi In-Flight Systems Inc. (GMIS) was set up to provide a total support capability in the USA with a repair workshop, field support and a customer training school. In 1992 GMIS were offering a passenger in-flight entertainment system (IFE).The GMIS product line included three systems, the non-interactive 2200A system, the interactive 2700IK system and the all-new 3200IM, which was to enter service in 1998. The 2200A was the equipment for the 777s operated by Japan Air System and Thai International. The 2700IK was the product supplied for British Airways, Emirates and United Airlines Boeing 777s. An even more advanced system the Model 3200 was planned.

An array of arcade-style and classic video games.

Electronic catalogues, permitting you to order merchandise that would be waiting for you when you arrived at your destination.

The ability to make rental car, theatre and hotel reservations, and more, en-route.

Telephones - including modem connectors - at every seat for aircraft-to-ground and ground-to-aircraft communications.

It was recognised too that passenger targeted advertising material could be used to generate revenue. Each passenger seat terminal had a Headset, a 5.7inch brightness adjustable LCD video screen, a digital control unit and an interactive handset for video games and telephone services. There is a Cabin Systems Control Panel to allow the cabin staff to control and monitor all the system facilities. The basic 2200A and 2200IK systems ran over copper wires distributing video from a Video Control Centre but there were separate networks for the optional video games and telephone services. The later 2700IK system retained the copper wire distribution but added a fibre-optic link and a separate telecommunications network. This system was interactive for passengers and flight attendants with each passenger having a digital passenger control unit and an interactive handset.   The proposed 3200 system was fully fibre-optic which gave a much increased bandwidth, reduced weight and less problems with EMC. Fully digital video streaming was incorporated but it is not known if this system was ever developed. Much of the equipment was made at GEC-Marconi in Portsmouth.

The audio and video systems were much liked by passengers, but GMIS ran into delays with the rest of the system and also in compatibility with new variants of the Boeing 777. In 1996 (GMIS) announced that it would leave the in-flight entertainment (IFE) market when its existing contractual commitments have been fulfilled. Most of the airlines have refitted their aircraft with new systems by now. 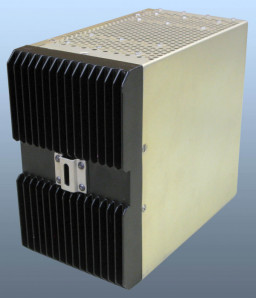