This is a low-density early stacked 8k x 18-bit core memory array, made by Plessey Components Ltd, Towcester, England. Plessey made core memories for a number of computer companies, and for example made 48-bit core memories for the Ferranti Atlas and for the English Electric KDF9. This type of stack was also used in the Elliott 903,and 920B computers in the mid 60’s.
Magnetic-core memory was the predominant form of random-access computer memory for 20 years between about 1955 and 1975. Such memory is often just called core memory, or, informally, core.

The cores in the stack However the robust construction of the unit and its colour suggests a military application, and probably from the Integrated Fire Control System (IFCS) for the Challenger Mk1Tank. The Challenger Mk1 went into service in 1983 but development of the Fire Control System was underway in the previous decade. The system activity was at Marconi Space and Defence Systems on the but the 12/12 computer and Power Supply were produced at Rochester. The gunnery control system was accurate but slow and it was replaced in the Challenger Mk2.

The stack is marked on the top:
TOWCESTER, PLESSEY COMPONENTS, ENGLAND with the Plessey ‘Oscilloscope’ mark. Another label on the top has:
PLESSEY CORE STORE, TYPE No 73’1556’A, SERIAL No 44082, REF. No P259 Issue B. TOWCESTER ENGLAND
Yet another label also on the top has:
Manufactured by GEC Computers Limited, CORE STACK 322 PURCH 259,
Serial No. 44082, P259 Issue B. Borehamwood England. A subsidiary of the General Electric Company.

http://www.computerconservationsociety.org/software/elliott903/more903/Manuals/index.htmThe 920 series of computers was developed at Elliotts Borehamwood Computing Division in the 1960’s and was derived from the successful 901 commercial computer which was miniaturised for airborne use. One of the primary production derivatives was the MCS 920M which was used in the
Jaguar Navigation and Weapon Aiming Sub-System NAVWASS This system comprised the MCS920M central digital computer, E3R inertial platform, projected map display and horizontal situation indicator together with the necessary power supply, electronic, interface and control units.
The MCS 920M is a microminiature general purpose digital computer using flat pack integrated circuits and. has a random access, 8192 word, 18 bit ferrite core store with a 2microsecond cycle time. Elliotts lacked access to multi-layer printed circuit board technology so used a special technique developed at the Borehamwood Computer Laboratory (see ‘Moving Targets’ by Simon Lavington). The box is unusual in that it folds out into three blocks.
In addition to performing navigation and weapon aiming calculators, the computer caters for in-flight monitoring, initial alignment and in situ first line system testing. The Computer also had an Interface Unit which enables the digital computer to receive and transmit information from and to other units in the aircraft in compatible signal form. The Interface Unit also supplied the power for the computer and Navigation Control Unit.
In its production form the MCS920M was widely used in its intended role in the Jaguar navigation attack system and eventually grew to a 64 K machine. The 920M also saw use in the ELDO rockets.
The MCS920M was also adopted for a number of naval inertial navigation applications.

Thanks to Terry Froggatt we have two pages of how a 920M is built.

The two pages shown look very like the Core Stack photos (minus a top plate) catalogued as C1059.

See:    http://www.computerconservationsociety.org/software/elliott903/more903/Manuals/index.htm  this gives copious links to the 920 Computer family. 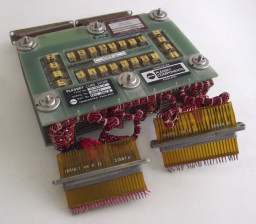 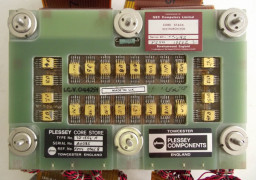