LOCWS = "Laser Obstacle & Cable Warning System"
This module contains moveable mirrors that rapidly scan a laser beam across the flight path of the aircraft. Reflections of the laser beam from objects are detected by the LOCWS and analysed to identify, and then warn of, hazardous obstacles ahead.

LOCUS was a powerful laser radar contained in a 14ft pod under the wing of the aircraft (similar in size to the FLIR Pod) for the detection of obstacles such as High Voltage cables. The pod houses in its nose a C02 laser which scans an 8° box: 2° up, 6° down, and 4° left and right, executing a near-vertical sinusoidal scan pattern at 50kHz, to build up a picture in 1-1.5 sec.

This picture is overlaid on the HUD FLIR image, and obstacles, once detected and stored, continue to be displayed even after they have moved out of the 8° box covered by the scanning laser.

Locus is designed to detect a 1 cm-diameter cable at l-5km range in pouring rain, giving sufficient time for the pilot to avoid an obstacle that is neither logged in the digital terrain database nor visible on FLIR.

The pod was ground-tested before shipment to the US Navy and worked successfully in the Real Night trial when it detected cables out to 2km.

Mike Busbridge and Dave Puleston of GEC Avionics Ltd presented a paper on the trial ‘A laser obstacle avoidance and display system’ at the Aerospace and Electronics Conference, 1989.

When test flying with the LOCUS Pod one pilot would fly with just the HUD and the second pilot acted as a safety pilot. I must have been quite exciting as they flew close to the ground towards power lines to see if the LOCUS Pod picked them up!. The laser radar would scan ahead to detect power lines which presented a danger to low-flying aircraft.The complex processing of the radar returns and creation of an image on the HUD was designed by Simon Trythall and required the latest INMOS transputers.The image had to overlay the real world perfectly regardless of the aircraft movement. The concept was brilliant and successful but sadly the system was never developed further. 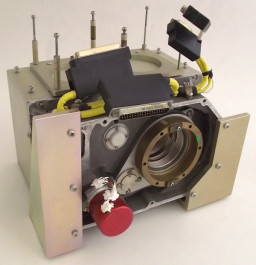 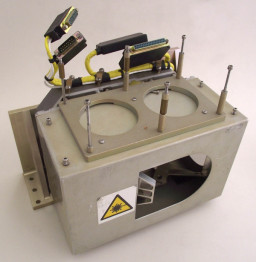