Refer also to the related Hermes equipment.
This item was in the original Elliott Collection Ref: 2031

The TOBIAS Intruder Alarm system is an advanced seismic alarm system officially entitled Alarm Set, Anti-intrusion, Restricted Area. The Army derived TOBIAS from Territorial Observation By Intrusion (or Intruder) Alarm System, although the manufacturer in defence catalogues stated that it was derived from Terrestrial Oscillation Battlefield Intruder Alarm System. TOBIAS was introduced into British Army service in 1969 and was widely used.

Ground microphones, referred to as geophones, were pushed into the soil and wires were fed to a control unit where the sound was amplified. An acoustic alarm was heard by the operator who could switch between microphone circuits and see a meter display of the triggering stimulus. The operator was supposed to be able to detect the direction and number of people moving from the amount of needle swing.

Detection ranges varied according to the ground conditions but would normally be no less than 30 metres radius from each geophone. The range could be reduced by other vibrations such as heavy rain, hail storms, traffic, movement of friendly personnel etc. The system could also be used to detect movements in buildings, tunnels and even riverbanks provided there was not excessive noise from water flow. There were three marks of control unit; the Mk 1 was made from fibreglass and the Mk 2 and Mk 3 from alloy. There were some minor changes between the different versions, but the most extraordinary feature was that so little effort went into protecting the three flimsy wires from the battery container in the lid to the terminals on main control panel. The lid instead of being hinged was held by toggle clamps. The lid was heavy with the weight of the batteries, so when

opened it tended to fall. It was so easy for the wires to become detached and easy to make an error in connecting them up again.

The batteries were 8 x 1.5Volt U2 cells, arranged to give 9 volts and 3 volts. Unfortunately the different current drains meant one set of batteries would last 200 hours, but the other set only 60 hours, which did not bode well for reliability. However there was the facility to switch one on the meters to measure battery voltage. A trigger from any of the four channels would give an acoustic alarm in the headphones of the operator. Each channel had its own meter to indicate which circuit had been triggered, and had a facility for testing the continuity of each circuit

The British Army used TOBIAS in the early days in Northern Ireland. Although a solid idea in practice it was difficult to differentiate between sheep, cows, and people’s footfalls. The equipment was made at Borehamwood (Manufacturer's code: K0978) but was maintained by the Aviation Service and Repair Division at Rochester.

Some text was taken from an article by Clive Elliott for these notes see Tabby03.pdf. Refer also to Hermes equipment under C0342 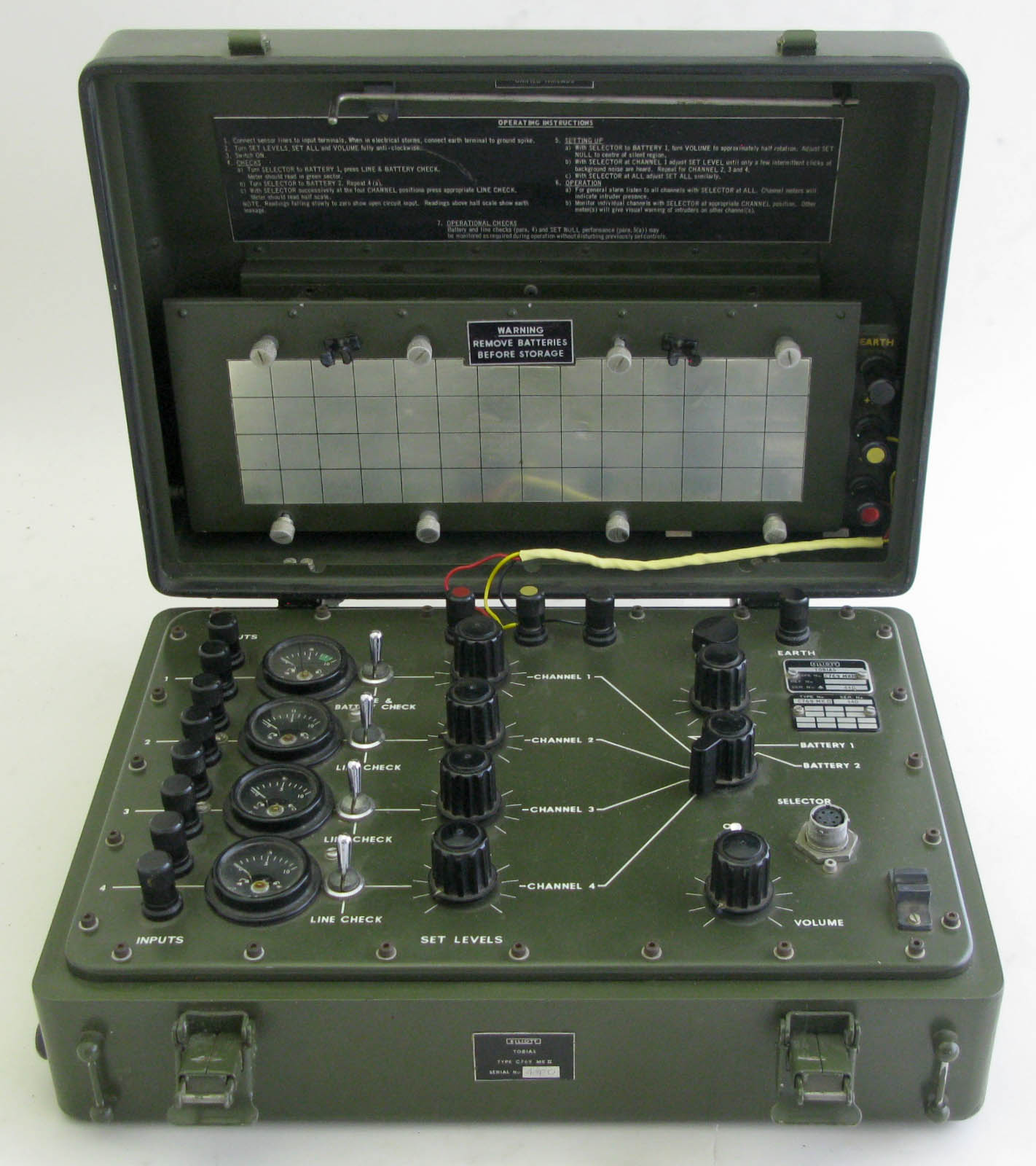 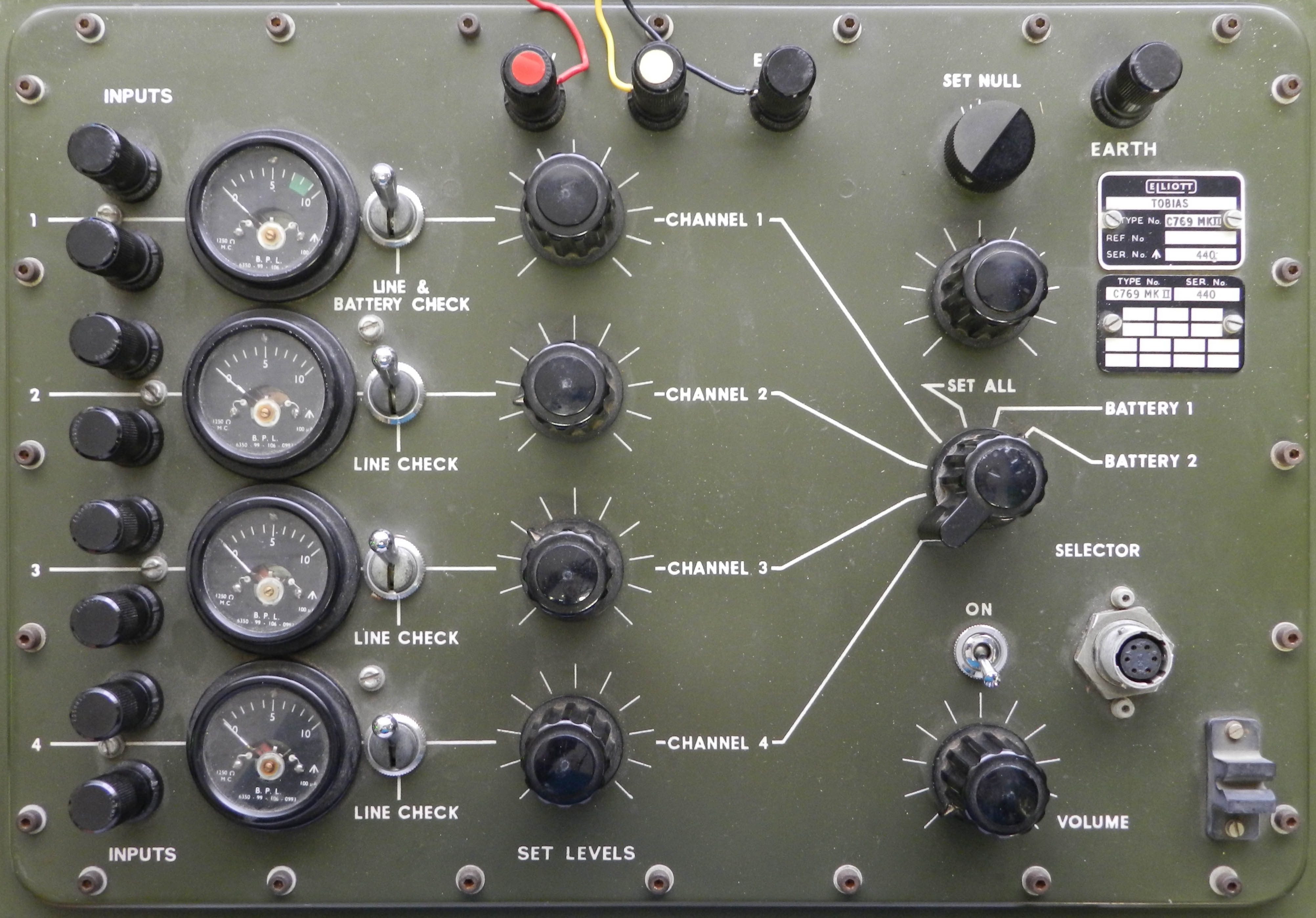 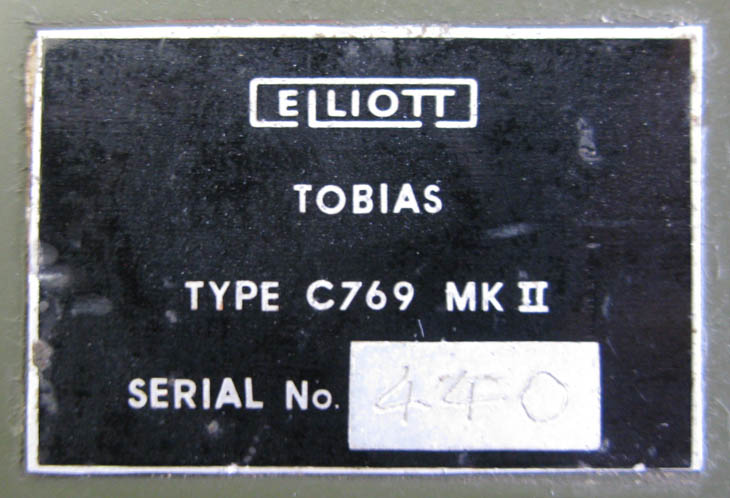