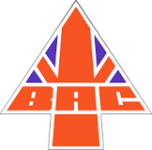 The British Aircraft Corporation (BAC) was a British aircraft manufacturer formed from the merger of English Electric Aviation Ltd., Vickers-Armstrongs (Aircraft), the Bristol Aeroplane Company and Hunting Aircraft in 1960. BAC was formed following a warning from government that it expected consolidation in the aircraft, guided weapons and engine industries. The government also promised incentives for such a move, including the supersonic BAC TSR-2 strike aircraft contract, the maintenance of government research and development spending and the guarantee of aid in launching "promising new types of civil aircraft".

On 29 April 1977, BAC, the Hawker Siddeley Group and Scottish Aviation were nationalised and merged under the provisions of Aircraft and Shipbuilding Industries Act 1977. This new group was established as a statutory corporation, British Aerospace (BAe).