Tower 1 has been externally completed and Tower 2 is under construction. The walkways are in place to connect to Tower 2.The low building in the foreground was the Model Shop for many years.

Development of the Towers at Rochester was commenced in about 1960; originally there were to be seven, which would add another 450,000 sq. ft. to the total. This extension was to be built in stages, the first of which was ready for occupation at the end of April 1961.

The main contractor was Arnold and Nathan of East Peckham, Kent who still traded until 2003 but as part of the Try Accord group. Trollope and Colls [110] were[BC(1]  contracted to carry out the groundwork and building as they were specialists in reinforced concrete a necessary skill to make the unique cantilevered floor structure; in the event only three towers were built.

There have been a number of piecemeal additions to the Rochester site after a long period of stability with the Hangars and Assembly Shops together with a miscellany of buildings up at the South end of the Airport. The first major additions were in the early 60's when the three Towers were constructed and completed in 1966. At the same time the offices along the South side of the Assembly factory were made double storey. As the site expanded various sites around Rochester and Chatham were acquired such as the New Road Building for the research centre (FARL), a Training School at Hopewell Drive and a Drawing Office at Gads Hill in Gillingham.

The next new building was the Corsair Building named after the A-7 Corsair HUD programme which was opened in 1978 on the South side of the site. This was a largely prefabricated construction estimated to have a lifespan of some 15 years but it is still going strong. By 1980 the new Phase III Building dedicated to the growing business in flight controls was operating and finally on that strip the Falcon Building, for the growing research and development of diffractive optical elements, was completed in 1983.

As the site began to contract the outpost buildings were closed down and some considerable refurbishment was done on the main site. The Restaurant was developed into a modern facility and the Towers had significant improvements such as new windows and air-conditioning.

However the basic structure of the site is showing its age and in reality most of the buildings are not suitable for the modern era. The Hangars in particular are very expensive to maintain. An attempt was made in 2004 to plan for a glossy new factory complex but nothing came of that,  and more recently the site management has been looking at constructing a number of new buildings. The downturn in the UK economy due to the Covid issue will probably put this plan on hold. 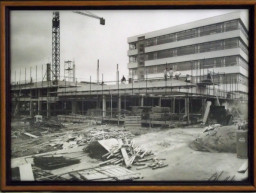 Aerial View of Rochester Site in 1965

The Towers under construction