This picture shows the electronics in the Automatic Map Reader.

Originally maps used with  moving map displays had a major disadvantage in that it was not possible to annotate them with planned route, target information and other tactical data; this had to be marked up on a hand-held map as an adjunct to the moving map. GEC Ferranti, developed the combined map and electronic display (COMED) system, in which the map is electronically annotated with intelligence or navigation data appropriate to the particular mission. Using no more space than a conventional moving map, COMED provides a colour topographical map display annotated with dynamic navigation information as required; this can include aircraft track and commanded track, present position, locations of known hostile detection or anti-aircraft devices, and tactical information such as the delineation of forward edge of the battle area. In addition, the system can print out alphanumeric information such as time to go to fix point or target.

COMED’s CRT and projection facilities permit it to perform other operational tasks. These can include the display of high-resolution high contrast symbology in raster form from radar, low light television or FLIR sensors. Electronic countermeasures threats can also be shown up. Tabular displays of weapons status, destination co-ordinates, or other tactical information can be shown on tabular ‘forms’ projected ’from images stored on the film. The system can be programmed with a library of aircraft and engine checklists. COMED can also act as a backup primary flight information display, particularly for the horizontal situation and attitude director indicators.

COMED interfaces with the main aircraft navigation computer via a MIL-STD-1553 serial digital data link. From a knowledge of film strip layout, aircraft present position and demanded scale, the main computer calculates the appropriate map drive words and transmits them to COMED by the data link. Within the display the information is converted into a form suitable for driving the map servo resolvers.

COMED uses standard 35 mm colour film up to 57 ft (17 m) long. Typically this provides coverage of an area of 10 000 nm2 at a scale of 1/250000, plus selected target areas at 1/50000 and sufficient film frames for tabulated displays. Film replacement can be achieved through a side access panel in under a minute.

More than 1000 systems have been supplied for the McDonnell Douglas F/A-18 Hornets with the US Navy and the armed forces of Australia, Canada and Spain. They are delivered to Bendix Flight Systems Division, the projected map assembly (PMA) forming part of the Bendix horizontal situation indicator, a combined map and electronic display for that aircraft. It projects a coloured topographical moving map image superimposed with data from a CRT image.  The system was ordered by the Indian Air Force for its Sepecat Jaguars made under licence by Hindustan Aero-nautics. The first production COMED system was delivered during early 1983. In May 1986 CEDAM (the latest variant of COMED) was selected for the Tornado ECR version ordered by the German Air Force. Deliveries of some 40 systems, plus spares, began in 1988. 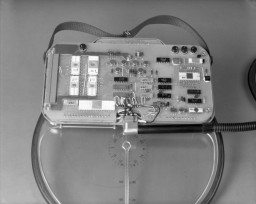