The Joint Strike Fighter (JSF) is a development and acquisition program intended to replace a wide range of existing fighter, strike, and ground attack aircraft for the United States, the United Kingdom, Italy, Canada, Australia, the Netherlands, and their allies. After a competition between the Boeing X-32 and the Lockheed Martin X-35, a final design was chosen based on the X-35. This is the F-35 Lightning II, which will replace various tactical aircraft, including the US F-16, A-10, F/A-18A-D, AV-8B and British Harrier GR7, GR9s, and Tornado GR4.

The JSF program was the result of the merger of the Common Affordable Lightweight Fighter (CALF) and Joint Advanced Strike Technology (JAST) projects. The merged project continued under the JAST name until the engineering, manufacturing and development (EMD) phase, during which the project became the Joint Strike Fighter.

In November 1995, the United Kingdom signed a memorandum of understanding to become a formal partner, and agreed to pay $200 million, or 10% of the concept demonstration phase.

In 1997, Canada's Department of National Defence signed on to the Concept Demonstration phase with an investment of US$10 million. This investment allowed Canada to participate in the extensive and rigorous competitive process where Boeing and Lockheed Martin developed and competed their prototype aircraft.

Studies supporting JAST/JSF started in 1993 and led to STOVL submissions to the DOD by McDonnell Douglas, Northrop Grumman, Lockheed Martin and Boeing.

Two contracts to develop prototypes were awarded on November 16, 1996, one each to Lockheed Martin and Boeing. Each firm would produce two aircraft to demonstrate conventional takeoff and landing (CTOL), carrier takeoff and landing (CV version), and short takeoff and vertical landing (STOVL). McDonnell Douglas' bid was rejected in part due to the complexity of its design. Lockheed Martin and Boeing were each given $750 million to develop their concept demonstrators and the definition of the Preferred Weapon System Concept (PWSC). The aim of this funding limit was to prevent one or both contractors from bankrupting themselves in an effort to win such an important contract.

Also in 1996, the UK Ministry of Defence launched the Future Carrier Borne Aircraft project. This program sought a replacement for the Sea Harrier (and later the Harrier GR7); the Joint Strike Fighter was selected in January 2001.

During concept definition, two Lockheed Martin airplanes were flight-tested: the X-35A (which was later converted into the X-35B), and the larger-winged X-35C.[13] Arguably the most persuasive demonstration of the X-35's capability was the final qualifying Joint Strike Fighter flight trials, in which the X-35B STOVL aircraft took off in less than 500 feet (150 m), went supersonic, and landed vertically – a feat that Boeing's entry was unable to achieve.

The contract for System Development and Demonstration (SDD) was awarded on 26 October 2001 to Lockheed Martin, whose X-35 beat the Boeing X-32. One of the main reasons for this choice appears to have been the method of achieving STOVL flight, with the Department of Defense judging that the higher performance lift fan system was worth the extra risk. When near to the ground, the Boeing X-32 suffered from the problem of hot air from the exhaust circulating back to the main engine, which caused the thrust to weaken and the engine to overheat.

The development of the JSF was jointly funded by the United States, United Kingdom, Italy, the Netherlands, Canada, Turkey, Australia, Norway and Denmark.

Lockheed Martin's X-35 would become the basis of the F-35 Lightning II, currently in production. On April 6, 2009 US Secretary of Defense Robert Gates announced that the US would buy a total of 2,443 JSFs. 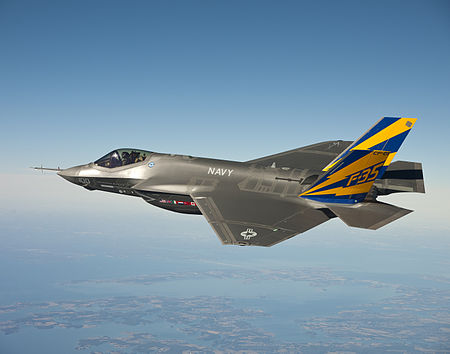