The Chengdu J-7 (export versions F-7) is a People's Republic of China-built fighter jet derived from the Russian Mikoyan-Gurevich MiG-21. It is an upgraded version of the original MiG-21 with more modern avionics and weaponry. It serves mostly as an interceptor in the air forces that operate it. In March, 1964, the Shenyang Aircraft Factory began the first domestic production of the jet fighter, which they successfully achieved next year. However, the mass production of the aircraft was severely hindered by an unexpected problem -- Cultural Revolution, which resulted in poor initial quality and slow progress, which in turn, resulted in full scale production only coming about in the 1980s, by which time the design was showing its age. However, the fighter is affordable and widely exported as the F-7, often with Western systems incorporated like the ones sold to Pakistan. In the mid 1990s, the PLAAF began replacing its J-7Bs with the substantially-redesigned J-7E variant. The wings of the J-7E have been changed to a unique "double delta" design offering improved aerodynamics and increased fuel capacity, and the J-7E also features a more powerful engine and improved avionics. The newest version of the J-7, the J-7G, entered service with the PLAAF in 2003. The production ceased in 2006. 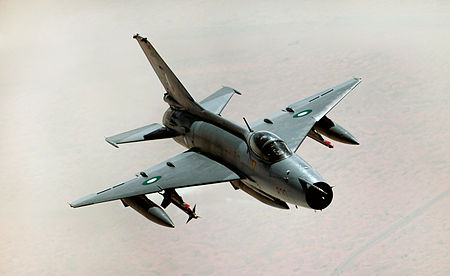