The AMX International AMX is a ground attack aircraft for battlefield interdiction, close air support and reconnaissance missions. It was built until 1999 by AMX International, an Italian-Brazilian joint venture. AMX is capable of operating at high subsonic speed and low altitude, by day or night, and if necessary, from bases with poorly equipped or damaged runways. Low IR signature and reduced radar equivalent cross-section help prevent detection, while low vulnerability of structure and systems aid survivability. Integrated ECM, air-to-air missiles and nose-mounted guns provide self-defence capabilities. In 1977, the Italian Air Force issued a requirement for a strike fighter to replace its Aeritalia G. 91 and some of its F104 Starfighters. Rather than competing for the contract, Aeritalia (now Alenia Aeronautica) and Aermachi agreed to make a joint proposal, as both firms had been considering the development of a similar class of aircraft for some years. Development work began in April 1978. In July 1981, the Italian and Brazilian governments agreed on joint requirements for the aircraft, and Embraer was invited to join the partnership. The first prototype flew on 15 May 1984 and production started by mid-1986, with the first examples delivered to the Italian and Brazilian air forces in 1989. Since then, some 200 AMXs have been built. 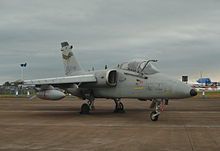