The English Electric Canberra was a first-generation jet-powered light bomber manufactured in large numbers through the 1950s. The Canberra had its origins in 1944 as a replacement for the unarmed high speed, high altitude de Havilland Mosquito bomber. Among the companies shortlisted to proceed with development studies was English Electric. The new English Electric design team was headed by former Westland chief designer W. E. W. Petter. The aircraft was named Canberra after the capital of Australia by Sir George Nelson, chairman of English Electric, because Australia was the first export customer for the aircraft. In May 1945 a contract was signed, but with the post-war military reductions, the prototype did not fly until May 1949. It proved to be highly adaptable, serving in such varied roles for tactical bombing, photographic, electronics, and meteorological reconnaissance. The Canberra remained in service with the Royal Air Force until 23 June 2006, 57 years after its first flight.

In the United Kingdom, the demand for Canberras exceeded English Electric's ability to manufacture the aircraft and several other British aviation firms, Handley Page, Avro and Short Brothers, manufactured the Canberra under licence. A total of 901 Canberras were manufactured in the UK, of world production of 1,352 aircraft.

In the United States, where the US Air Force needed to replace the B-26 Invader and no home-produced aircraft designs could get close to what the British aircraft could offer, 403 Canberras were manufactured under licence by Martin as the B-57 Canberra in several versions. 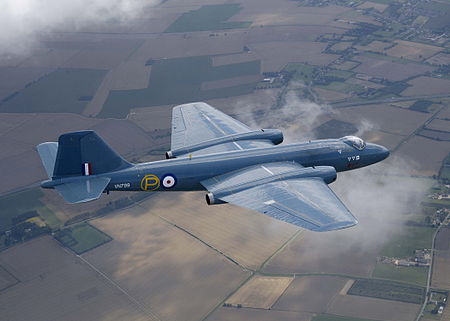