The BAE Systems Hawk is a British advanced jet trainer which first flew in 1974 as the Hawker Siddeley Hawk. It is used by the Royal Air Force, and other air forces, as either a trainer or a low-cost combat aircraft. The Hawk is still in production with over 900 Hawks sold to 18 customers around the world.

An RAF requirement was born in 1964 calling for a new, modern jet-powered trainer. Hawker Siddeley, took on an in-house design initiative utilizing its own funds and in 1969, the P.1182 was formally designated, eventually becoming universally known as the HS.1182. The prototype Hawk went airborne for the first time on August 21st, 1974 and later accepted in production form as the Hawk T.Mk 1 beginning in April of 1976. A total of 176 Hawk T.Mk 1s were delivered to the RAF.

After several years of operational service the T.Mk 1A model was produced armed with the AIM-9L missile. Beyond its use by the RAF, the British Royal Navy also saw some value in the new Hawk system and took on at least 12 examples for the purpose of training naval radar specialists and ship-based weapons personnel.

The first export-minded airframe came under the "Hawk Mk 50" designation and featured a higher-rated powerplant four underwing stores for munitions in the ordnance training or operational strike role. Some 89 examples of the Hawk Mk 50 were produced in all for Finland, Kenya and Indonesia.

The Hawk was upgraded to produce the Hawk 100 production model. This introduced a more powerful Rolls-Royce Adour 871 series turbofan engine. Avionics were also expanded and Multi-Function Displays (MFDs) and HUD was used. This series was delivered to Abu Dhabi,Oman,  Malaysia, Indonesia, Canada (as the CT-155 Hawk, India and Bahrain.

The Hawk 120 LIFT (Lead-In Fighter Trainer) was a Hawk production model designation appearing in late 1999 and chosen by South Africa. Further sales were made to Australia.

The Hawk 128 (Hawk T.Mk 2) is the latest Hawk incarnation to date and based on the South African Hawk 120 LIFT and Australian Hawk 127 LIFT series export models. It is currently being marketed by BAe as an "Advanced Jet Trainer" (AJT) and has already found a customer in the British military. BAE Systems markets the AJT as a stepping stone for pilots soon to enter the world of flight in modern and future combat systems such as those found in the Boeing F/A-18 Hornet / Superhornet series, the Eurofighter Typhoon and the upcoming Lockheed F-35 Lightning II multi-role aircraft. First flight of the T.Mk 2 was recorded on July 27th, 2005.

The Hawk 200 is regarded as the single-most distinct and lethal version of the Hawk family line. Unlike the trainers before it, the Hawk 200 is a single-seat mount and categorized specifically as a lightweight multirole fighter. This variant first flew on May 19th, 1986. Oman became the first Hawk 200 purchaser and deliveries were made to Indonesia.

The US Navy T-45 Goshawk is a plain offshoot of the British BAe Hawk Mk 60, but is largely considered its own aircraft design due to the myriad of modifications brought about to fulfil USN requirements for an advanced, carrier-capable jet trainer to replace their aging T-2C Buckeyes and TA-4J Skyhawks.

The RAF introduced the Hawk as the platform for their "Red Arrows" aerial acrobatics team in 1979. Additionally, this served BAe well in showcasing the inherently capabilities of their agile aircraft system to other potential global customers.

January 2017 - Hindustan Aeronautics of India has unveiled its first "Hawk-I" advanced trainer. The design is a locally produced, upgraded Indian version of the Hawk.

October 2017 - BAe Systems announced a six-strong Hawk trainer order from Qatar. This order coincides with the nation's plans to procure some 24 Eurofighter Typhoons as well.

July 2018 - It was announced that Qatar is planning to procure nine Hawk advanced jet trainers. This order forms a portion of its earlier commitment to purchase twenty-four Eurofighter Typhoons for its frontline fighter needs. Deliveries of the Hawks are planned for 2021.

September 2018 - The first of nine Hawks to Qatar is scheduled to be delivered during 2021.

December 2018 - The BAe "Improved Hawk" is a contender for a 33-strong advanced jet trainer requirement of the Royal Australian Air Force.

March 2019 - Royal Australian Air Force (RAAF) Hawks have completed their modernization program which began in 2014. The work covered upgrades to thirty-three BAe Hawks currently in service and extends their flying lives into 2040.

This information is from 'Military Factory', Click here to read more. 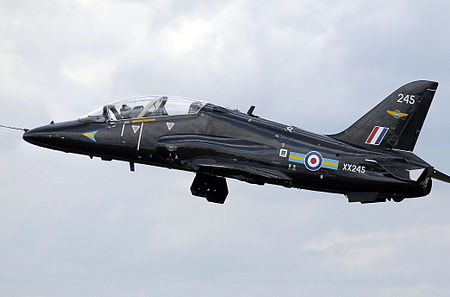 I/O Base & Daughter Board Assembly

I/O Base & Daughter Board Assembly