The Jindivik is a target drone produced by the Australian Government Aircraft Factory (GAF). The name is from an Aboriginal Australian word meaning hunted one. A manned version, the GAF Pika was built as a proof of concept to test the aerodynamics, engine and radio control systems. Development began in 1948, with the first flight of the Pika in 1950 and the first flight of the Jindivik Mk.1 in August 1952 From 1952 to 1986, a total of 502 aircraft were produced. In 1997, the production line was re-opened to build another 15 for Britain. This aircraft has been used by the Royal Australian Air Force, the Fleet Air Arm and the Royal Air Force. The latest of some 20 Jindivik variants, the Mk 4A first flew at Llanbedr, in Wales, in 1987 and introduced further performance enhancements including greater manoeuvrability. The most notable spin-off from the Jindivik programme was probably the Viper jet engine. Originally designed to be a cheap, short life engine, its success led to widespread use in such aircraft as the Jet Provost and the HS.125. The Jindivik has now been withdrawn from service. Elliotts supplied the Flight Control system for the Jindivik

This information is from Wikipedia, the free encyclopedia. Click here to read the full article. (Picture from RAA collection) 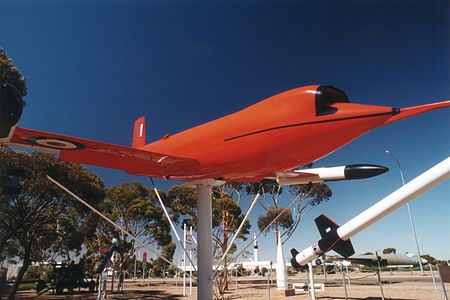