The Supermarine Spitfire is a British single-seat fighter aircraft that was used by the Royal Air Force and many other Allied countries throughout the Second World War. The Spitfire continued to be used as a front line fighter and in secondary roles into the 1950s. It was produced in greater numbers than any other British aircraft and was the only British fighter in production throughout the war. The Spitfire was designed as a short-range, high-performance interceptor aircraft by R.J. Mitchell, chief designer at Supermarine Aviation Works. The Spitfire's elliptical wing had a thin cross-section, gave a high speed which was essential to carry out the mission of home defence against enemy bombers. After the Battle of Britain, the Spitfire became the backbone of RAF Fighter Command, and saw action in the European, Mediterranean, Pacific and South-East Asian theatres. Much loved by its pilots, the Spitfire served in several roles, including interceptor, photo-reconnaissance, fighter-bomber, carrier-based fighter, and trainer. It was built in many variants, using several wing configurations. When the last Spitfire rolled out in February 1948, a total of 20,351 examples of all variants had been built, including two-seat trainers, with some Spitfires remaining in service well into the 1950s. The Spitfire was the only British fighter aircraft to be in continuous production before, during and after the Second World War. 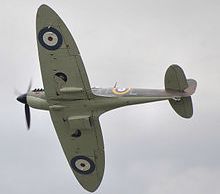