The T-45 Goshawk is a highly modified version of the Hawk Mk.60 land-based training jet aircraft. Manufactured by now Boeing and BAE Systems, the T-45 is used by the United States Navy as an aircraft carrier-capable trainer. The Goshawk's origins began in the mid-1970s, when the US Navy began looking for replacement for its T-2 and TA-4 trainers. The US Navy started the VTXTS advanced trainer program in 1978. Boeing and BAE Systems were awarded the T-45 contract in 1981. The Hawk had not been designed for carrier operations. Numerous modifications were required for Navy carrier use, including improvements to the low-speed handling characteristics and a reduction in the approach speed. Other changes were strengthened airframe, more robust and wider landing gear with catapult attachment and an arresting hook. It features a two-wheel nose landing gear. The Goshawk first flew in 1988 and became operational in 1991. BAE Systems manufactures the fuselage aft of the cockpit, the air inlets, the vertical stabilizer of the T-45 at Samlesbury, and the wings at Brough, England. Boeing manufactures the remainder of the aircraft and assembles them in St. Louis, Missouri. On 16 March 2007 the 200th airframe was delivered to the US Navy. Their requirements call for 223 aircraft, and the T-45 service is slated to continue until at least 2035. 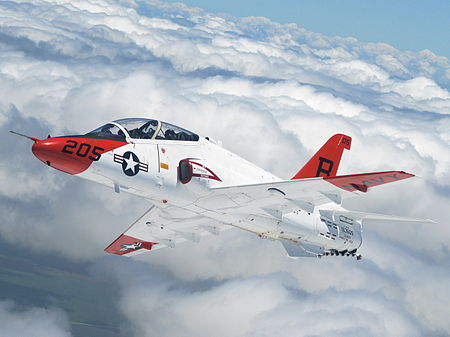