The Eurocopter Tiger is an attack helicopter manufactured by Eurocopter. In Germany it is known as the Tiger; in France and Spain it is called the Tigre. It is also designated the EC 665 or PAH-2. In 1984 the German and French governments issued a requirement for an advanced multi-role battlefield helicopter. The first prototype first flew in April 1991. When Aerospatiale and MBB, among others, merged in 1992 to form the Eurocopter Group. Serial production of the Tiger began in March 2002 and the first flight of the first production Tiger HAP for the French Army took place in March 2003. The delivery of the first of the eighty helicopters ordered by the French took place in September 2003. At the end of 2003 deliveries began of the 80 UHT version combat support helicopters ordered by Germany. In December 2001 Eurocopter was awarded the contract for the Australian Army?s "Air 87 Requirement", which was for 22 helicopters of the Tiger ARH (Armed Reconnaissance Helicopter) version. In September 2003, Spain selected a variant of the Tiger HAP combat support helicopter - the Tiger HAD - for its army In July, 2006, the Saudi Government signed a contract to purchase a total of 142 helicopters, including 12 Tiger attack helicopters. 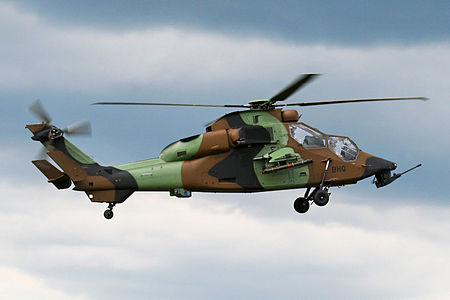 Tiger: There's a Lot Riding on It.