The Boeing 777 is a family of long-range wide-body twin-engine jet airliners developed and manufactured by Boeing Commercial Airplanes. It is the world's largest twinjet and has a typical seating capacity for 314 to 451 passengers, with a range of 5,235 to 8,555 nautical miles (9,695 to 15,844 km). Commonly referred to as the "Triple Seven", its distinguishing features include the largest-diameter turbofan engines of any aircraft, six wheels on each main landing gear, fully circular fuselage cross-section, and a blade-shaped tail cone. Developed in consultation with eight major airlines, the 777 was designed to replace older wide-body airliners and bridge the capacity difference between Boeing's 767 and 747. As Boeing's first fly-by-wire airliner, it has computer-mediated controls. It is also the first entirely computer-aided designed commercial aircraft.

The 777 first entered commercial service with United Airlines on June 7, 1995. It has received more orders than any other wide-body airliner; as of September 2015, 60 customers had placed orders for 1,881 aircraft of all variants, with 1,340 delivered. The most common and successful variant is the 777-300ER with 596 delivered and 786 orders; Emirates operates the largest 777 fleet, with 147 passenger and freighter aircraft as of September 2015. GEC Avionics (BAE Systems) make the Primary Flight Computers. 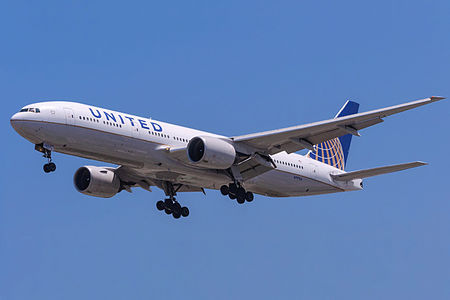 Medallion Celebrating the Rollout of the Boeing 777-300ER