The aircraft was based on the Canadair Challenger design, which was purchased by Canadair from Learjet in 1976. The wide fuselage of the Challenger suggested early on to Canadair officials that it would be straightforward to stretch the aircraft to accomomodate more seats. In 1987, studies began for a much more ambitious stretched configuration, leading to the formal launch of the Canadair Regional Jet program in the spring of 1989. The "Canadair" name was retained despite the fact that Bombardier had bought out the company. The first of three development machines for the initial CRJ100 performed its first flight on 10 May 1991. The type obtained certification in late 1992, with initial delivery to customers late in that year.

The picture is from this Wikipedia image which has been released into the public domain by its author, Arpingstone. This applies worldwide. In some countries this may not be legally possible; if so: Arpingstone grants anyone the right to use this work for any purpose, without any conditions, unless such conditions are required by law. 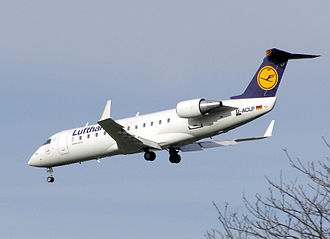