The Northrop Grumman (formerly Grumman) EA-6B Prowler is a twin-engine, mid-wing electronic warfare aircraft derived from the basic A-6 Intruder airframe. The EA-6B has been in service with the U.S. Armed Forces from 1971 through the present, during which it has carried out numerous missions for jamming enemy radar systems, and in gathering radio intelligence on those and other enemy air defence systems. In addition, the EA-6B is capable of carrying and firing anti-radiation missiles (ARM), such as the HARM missile. The aircrew of the EA-6B consists of one pilot and two or three Electronic Countermeasures Officers. 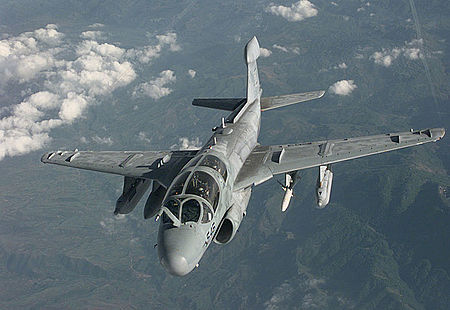