In 1981, the U.S. Air Force developed a requirement for an Advanced Tactical Fighter (ATF) as a new air superiority fighter to replace the F-15 and F-16. In April 1991, the Lockheed MartinYF-22 was announced as the winner of the ATF competition. The production F-22 model was unveiled in April 1997 at Lockheed Georgia Co. and first flew in September 1997. Production deliveries commenced in 2003.

The F-22 Raptor is a fifth-generation fighter aircraft that uses stealth technology. It is primarily an air superiority fighter, but has multiple capabilities that include ground attack, electronic warfare, and signals intelligence roles. Lockheed Martin Aeronautics is the prime contractor and is responsible for the majority of the airframe, weapon systems and final assembly of the F-22. Program partner Boeing Integrated Defense Systems provides the wings, aft fuselage, avionics integration, and all of the pilot and maintenance training systems. The aircraft was variously designated F-22 and F/A-22 during the years prior to formally entering US Air Force service in December 2005 as the F-22A. Despite a protracted and costly development period, the United States Air Force considers the F-22 a critical component of the US strike force, and claims that the F-22 cannot be matched by any known or projected fighter aircraft. 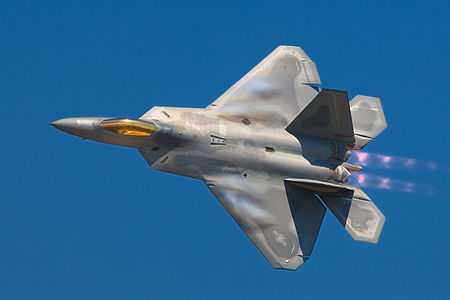