The company that evolved into Gulfstream Aerospace Corp. started in the late 1950s when Grumman Aircraft Engineering Co., a company known for military aircraft production, developed a marketable business aircraft at its manufacturing facilities in Bethpage, N.Y. The turbo-prop aircraft was named Gulfsteam I. The newly developed aircraft, the first of its kind designed specifically for business travel, was a success in the business world, prompting Grumman to develop a jet-powered corporate aircraft called the Gulfstream II. The GIII made its first flight in December 1979, with the first delivery of the aircraft occurring in 1980. In 1982 the company's name changed to Gulfstream Aerospace Corp. to reflect its worldwide scope, and a new plane, the Gulfstream IV was conceived. The Gulfstream V, the first ultra-long range business jet, was rolled out in 1995. At the end of the 1990s, General Dynamics, a giant in the defense industry, purchased Gulfstream. The G550 is the first civil aircraft to receive a Type Certificate issued by the Federal Aviation Administration (FAA) that includes an Enhanced Vision System (EVS) as standard equipment on an aircraft. The EVS is supplied by Marconi Avionics (now BAE Systems) in partnership with Honeywell. 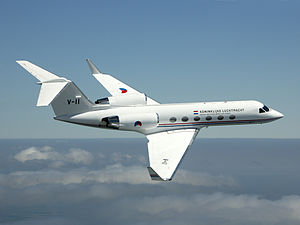