The MiG-21 jet fighter was a continuation of Soviet jet fighters, starting with the subsonic MiG-15 and MiG-17, and the supersonic MiG-19. A number of experimental Mach 2 Soviet designs were based on nose intakes with either swept-back wings, such as the Sukhoi Su-7, or tailed deltas, of which the MiG-21 would be the most successful.

Development of what would become the MiG-21 began in the early 1950s, when Mikoyan OKB finished a preliminary design study for a prototype designated Ye-1 in 1954. This project was very quickly reworked when it was determined that the planned engine was underpowered; the redesign led to the second prototype, the Ye-2. Both these and other early prototypes featured swept wings. The first prototype with delta wings as found on production variants was the Ye-4. It made its maiden flight on 16 June 1955 and its first public appearance during the Soviet Aviation Day display at Moscow's Tushino airfield in July 1956.

Approximately 60 countries over four continents have flown the MiG-21, and it still serves many nations six decades after its maiden flight. It made aviation records, became the most-produced supersonic jet aircraft in aviation history, the most-produced combat aircraft since the Korean War and previously the longest production run of a combat aircraft (now exceeded by both the McDonnell Douglas F-15 Eagle and General Dynamics F-16 Fighting Falcon).

The picture is of an Indian Airforce MiG-21 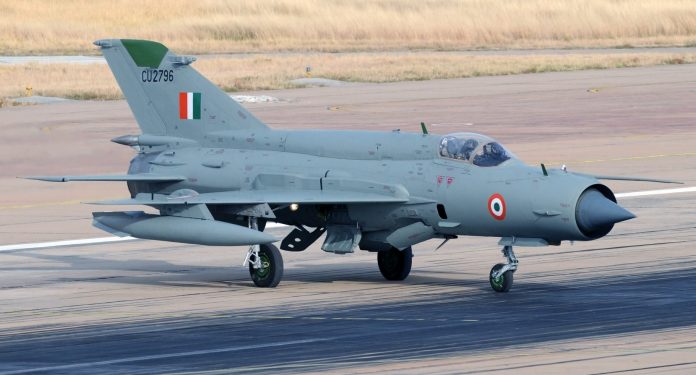