The KAI T-50 Golden Eagle is a family of South Korean supersonic advanced trainers and multirole light fighters, developed by the consortium established by Korea Aerospace Industries (KAI) with the American aerospace company Lockheed Martin. The T-50 is South Korea's first indigenous supersonic aircraft and one of the world's few supersonic trainers. Development began in the late 1990s, and its maiden flight occurred in 2002. The aircraft entered active service with the Republic of Korea Air Force (ROKAF) in 2005.

The T-50 program was originally intended to develop an indigenous trainer aircraft capable of supersonic flight, to train and prepare pilots for the KF-16 and F-15K, replacing trainers such as T-38 and A-37 that were then in service with the ROKAF. Prior South Korean aircraft programs include the propeller-driven KT-1 basic trainer produced by Daewoo Aerospace (now part of KAI), and license-manufactured KF-16. In general, the T-50 series of aircraft closely resembles the KF-16 in configuration. 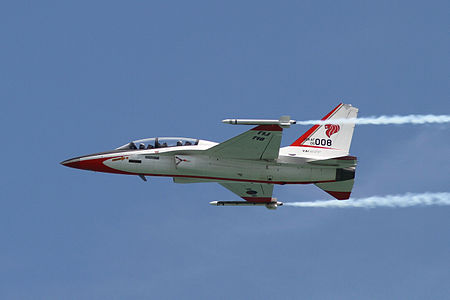