The YC-14 was Boeing's entrant into the USAF's Advanced Medium STOL Transport (AMST) competition, which aimed to replace the C-130 Hercules as the USAF's standard STOL tactical transport. Although both the YC-14 and the competing McDonnell Douglas YC-15 were very successful, neither aircraft entered production, and the AMST project was eventually shut down in 1979. The first Boeing YC-14 flew on 9 August 1976. Two aircraft were built. The competing YC-15 had started flights almost a year earlier. Head-to-head flight testing at Edwards Air Force Base started in early November 1976. At the completion of testing in the late summer of 1977, the YC-14 prototypes were returned to Boeing. The prototypes were not scrapped, and one is stored at AMARC, located at Davis-Monthan Air Force Base and the other is on display at the nearby Pima Air & Space Museum. Although the YC-14 and YC-15 both met or exceeded the specifications of the contest, the increasing importance of the strategic vs. tactical mission eventually led the Air Force to conclude that they were better off with an updated C-130 in the short term. In the longer term, a much larger aircraft would be developed out of the YC-15, as the C-17 Globemaster III. 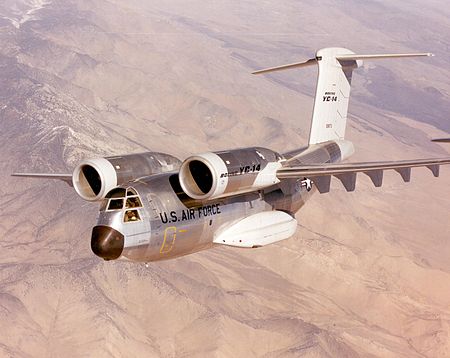