The Fairchild Republic A-10 Thunderbolt II is an American twin-engine, straight wing jet aircraft developed by Fairchild-Republic in the early 1970s. It entered service in 1976, and is the only United States Air Force production aircraft designed solely for close air support, including attacking tanks, armoured vehicles, and other ground targets.

The A-10 was designed around the 30 mm GAU-8 Avenger rotary cannon that is its primary armament. The A-10's airframe was designed for durability, with measures such as 1,200 pounds (540 kg) of titanium armour to protect the cockpit and aircraft systems, enabling it to absorb a significant amount of damage and continue flying. Its short take-off and landing capability permits operation from airstrips close to the front lines, while its simple design enables maintenance at forward bases with limited facilities. The A-10A single-seat variant was the only version built, though one A-10A was converted to an A-10B twin-seat version. In 2005, a program was begun to upgrade remaining A-10A aircraft to the A-10C configuration.

The A-10's official name comes from the Republic P-47 Thunderbolt of World War II, a fighter that was particularly effective at close air support. The A-10 is more commonly known by its nicknames "Warthog" or "Hog". Its secondary mission is to provide forward air controller - airborne (FAC-A) support, by directing other aircraft in attacks on ground targets. Aircraft used primarily in this role are designated OA-10. With a variety of upgrades and wing replacements, the A-10's service life may be extended to 2028, though there are proposals to retire it sooner.

The Company bid for the Head Up Display but failed to win the contract but more recently supply LCD Colour Head Down Displays. 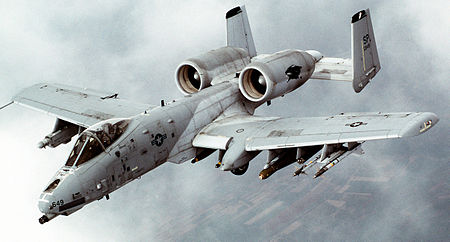 Model of Fairchild A-10