The Boeing X-32 was a multi-purpose jet fighter in the Joint Strike Fighter contest. It lost to the Lockheed Martin X-35 demonstrator which was further developed into the F-35 Lightning II. The X-32 featured a large chin mounted air intake and a large one piece carbon fibre composite wing which would prove a challenge to fabricate. The first flight of the X-32A took place in September 2000, from Boeing's Palmdale plant to Edwards Air Force Base. The X-32B demonstrated STOVL flight, first flying in March 2001. The X-32 achieved STOVL flight in much the same way as the AV-8 Harrier II with thrust vectoring of the jet and fan exhaust. On 26 October 2001 the Department of Defense announced that the Lockheed Martin X-35 won the JSF competition. One of the main reasons for this choice appears to have been the method of achieving STOVL flight, with the Department of Defense judging that the higher performance lift fan system was worth the extra risk. When near to the ground, the Boeing X-32 suffers from the problem of hot air from the exhaust circulating back to the main engine, which causes the thrust to weaken and the engine to overheat. In 2005 the Boeing X-32A was transferred to the National Museum of the United States Air Force in Dayton, Ohio. Its condition had deteriorated due to sitting outside for several years following the end of the JSF competition. The X-32B was restored and is now on display at the Patuxent River Naval Air Station's Naval Air Museum in St. Mary's County, Maryland. 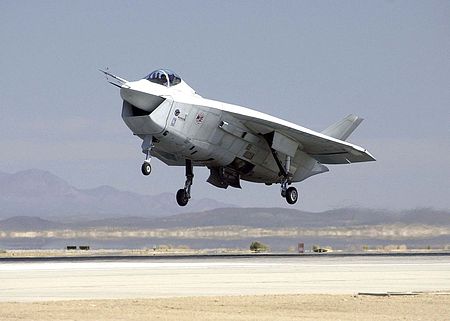