The Short Belfast was developed to meet Air Staff Requirement 371 for a freighter capable of carrying a wide range of military loads over a long range.  Short Brothers’ design project began in 1959 and the prototype first flew on 5th January 1964 with chief test pilot Denis Taylor at the controls.  The original concept of a fleet of 30 aircraft was reduced to 10 as an economic measure stemming from the UK’s Sterling Crisis of 1965.  The Belfast C1, as she was designated, entered service with No 53 Squadron in January 1966.

Powered by four x Rolls-Royce Tyne Mk 101 turboprops, the Belfast boasted a cargo deck 64 ft long and 18 ft wide, with upper floor, accessed through a “beaver tail” incorporating loading doors and integral ramp.  The aircraft had a maximum payload of 78,000 lb with a wide range of cargo options including artillery, armour, helicopters, vehicles or 150 fully equipped troops (200 with the upper floor removed).  Following entry into service, a major drag problem prevented the first five aircraft reaching the desired performance and modifications including the addition of a new rear fairing were necessary to improve cruising speed to the required level – by which time the unfortunate sobriquets of “Dragmaster” and “Belslow” had been acquired.

The reorganisation of the RAF and introduction of Strike Command in 1968 heralded the retirement of several aircraft types including the Britannia and Comet in 1975 and the Belfast the following year.

A commercial company, Transmeridian Air Cargo, purchased five Belfasts in 1977 and operated three from 1980 after being certified to civilian standards.  Ironically, the RAF chartered these aircraft to support the airlift commitment during the Falklands War in 1982 and a single machine in support of the First Gulf War almost a decade later.  The last remaining Belfast was flown to Australia by Heavy Lift Cargo Airlines in 2003 and, although not having flown since, there are reports of it being returned to airworthiness.  The last production machine is on display at the RAF Museum, Cosford.

This information is from The Tangmere Aviation Military Museum website Wikipedia, the free encyclopedia Click here to read the full article. 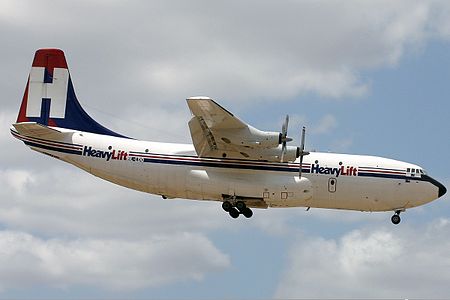