The Request for Proposals for the Lightweight Fighter (LWF) was issued in 1972, and called for a 20,000 lb class fighter with a good turn rate, acceleration and range, and optimized for combat at speeds of Mach 0.6?1.6 and altitudes of 30,000?40,000 ft. This was the region in which the USAF expected most future air combat to occur. The anticipated average flyaway cost of a production version was $3 million. Several companies submitted proposals, and General Dynamics and Northrop were both asked to produce prototypes for head-to-head testing. These were ready in 1974, and in extensive testing General Dynamics' YF-16 proved somewhat better overall, winning the LWF contest. By this time a number of countries were looking for a multi-role replacement for their existing aircraft. Up to this point, the LWF was merely an evaluation program with no plans to purchase models, but the possibility of a European order led the Pentagon to reconsider. The Air Force was now seeking a multi-role fighter to replace the F-105, so the program was renamed the Air Combat Fighter (ACF). In September 1974, the Air Force announced plans to purchase 650 ACFs. On 13 January 1975, Secretary of the Air Force John McLucas announced the selection of the YF-16, beating out Northrop's YF-17. After selection, the YF-16 design was altered for the production F-16. The fuselage was lengthened 10 in, wing and horizontal stablizer areas were increased slightly and two hardpoints were added.

This information is from Wikipedia, the free encyclopedia. Click here to read the full article. The picture is from the RAA collection. 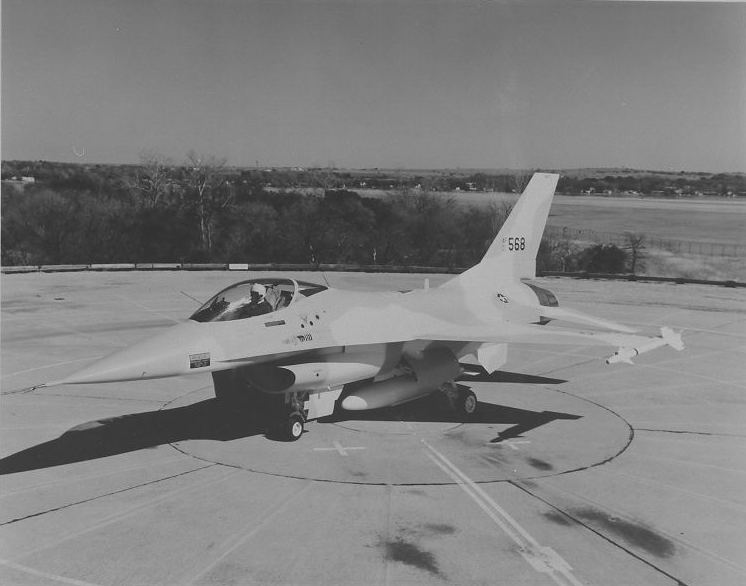