This is a complete set of Cats Eyes™ Night Vision Goggles made by GEC Avionics.

In March 1982 a demonstrator was produced which had a field of view of 45deg horizontal and 30deg vertical and achieved all the design targets with a low head mounted mass and minimum moment about the pilot's head. Favourable evaluation lead to the manufacture by the Airborne Display Division of flyable prototypes. 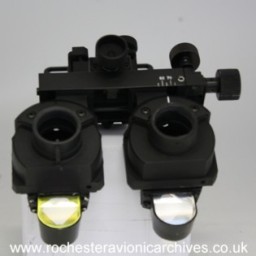 Letter from the Department of the Navy

Staff Ellis, J. Fisher and B. Gotting with Prince Charles.