The Lockheed Martin F-16 Fighting Falcon is an American multirole jet fighter aircraft originally developed by General Dynamics (GD) for the United States Air Force. Designed as a lightweight fighter, it evolved into a successful multirole aircraft. The Fighting Falcon is a dogfighter with numerous innovations including a frameless, bubble canopy for better visibility, side-mounted control stick to ease control while under high g-forces, and reclined seat to reduce the effect of g-forces on the pilot. It was also the first fighter aircraft deliberately built to sustain 9-g turns. It has a thrust-to-weight ratio greater than one, providing enough power to climb and accelerate vertically if necessary. The F-16 has a quadruplex (four-channel) fly-by-wire (FBW) flight control system The Falcon's versatility is a paramount reason it was a success on the export market, serving 24 countries.The F-16 is the largest Western fighter program with over 4,000 aircraft built since production started. The first example, an F-16A, made its first flight in December 1976. The initial two-seat F-16B achieved its first flight in August 1977. The C/D variant introduced a very substantial improvement in cockpit avionics, including improved fire-control and stores management computers, an Up-Front Controls (UFC) integrated data control panel, data-transfer equipment, multifunction displays, radar altimeter, and many other changes. The aircraft are fitted with the Westinghouse AN/APG-68 radar and have improved precision night-attack capability. The single seat F-16C first flew in June 1984 and entered USAF service in September. Block 25?s were first delivered with the Pratt & Whitney F100-PW-200 engine and later upgraded to the Pratt & Whitney F100-PW-220E. Later Blocks had an alternative General Electric engine Block 32H/J aircraft were assigned to the USAF Thunderbird flight demonstration squadron.The Block 40/42 is the improved all-day/all-weather strike variant equipped with the LANTIRN pod. Subsequently more upgrades have taken place up to Block 60 with numerous special versions. 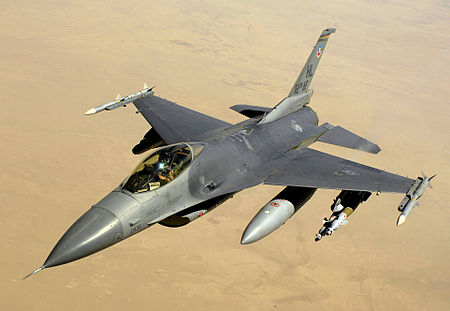 A Decade on the Move (F-16 promotion)

A Decade on the Move

The Hot Performer. The F-16

Thunderbirds, the legend lives on

Diffractive HUD in the F-16