The C-5 is one of the largest aircraft in the world and the largest airlifter in the Air Force inventory. The C-5 can carry more than any other airlifter. It has the ability to carry 36 standard pallets and up to 81 troops simultaneously. The Galaxy also carries all of the Army's air-transportable combat equipment, including such bulky items as its 74-ton mobile scissors bridge from the United States to any theatre of combat on the globe. It can also carry outsize and oversize cargo intercontinental ranges and can take off or land in relatively short distances. Ground crews are able to load and off-load the C-5 simultaneously at the front and rear cargo openings, reducing cargo transfer times. Lockheed-Georgia Co. delivered the first operational Galaxy to the 437th Airlift Wing, Charleston Air Force Base, S.C., in June l970. C-5s are operated by active-duty, Reserve, and Air National Guard crews. In March 1989, the last of 50 C-5B aircraft was added to the 76 C-5As in the Air Force's airlift force structure. The C-5B includes all C-5A improvements as well as more than 100 additional system modifications to improve reliability and maintainability. Based on a study showing 80 percent of the C-5 airframe service life remaining the C-5 Avionics Modernization Program began in 1998 and includes upgrading avionics to Communications, Navigation, Surveillance/Air Traffic Management compliance, improving navigation, communication, and safety equipment, and installing a new autopilot system.

The picture is from a now superseded USAF website: http://www.af.mil/factsheets/factsheet_media.asp?fsID=84.

The AF.mil website declares:
"AF.mil is provided as a public service by the Office of the Secretary of Air Force (Public Affairs). Information presented on AF.mil is considered public information and may be distributed or copied. Use of appropriate byline/photo/image credits is requested." 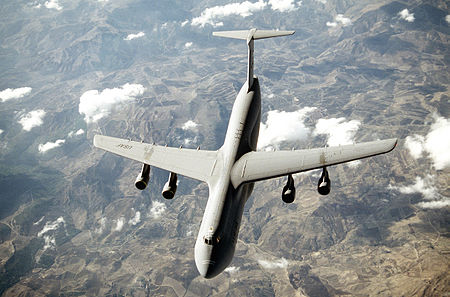