The Westland Lynx is a British helicopter designed by Westland and built at Westland's factory in Yeovil, first flying on 21 March 1971 as the Westland WG.13. Originally intended as a utility craft for both civil and naval usage, military interest led to the development of both battlefield and naval variants, which went into operational usage in 1977 and were later adopted by the armed forces of over a dozen nations. The helicopter is now produced and marketed by AgustaWestland. The Lynx is an agile helicopter, capable of performing loops and rolls. The British Army ordered 100 Lynx AH (Army Helicopter) Mk.1 for various roles, including tactical transport, armed escort, anti-tank warfare (with eight TOW missiles), reconnaissance and evacuation. The Army has fitted a Marconi Elliot AFCS system onto the Lynx for automatic stabilisation on three axis. An advanced Future Lynx On 22 June 2006 the UK Ministry of Defence awarded Westland a œ1 billion contract for 70 Future Lynx helicopters under a strategic partnering agreement with AgustaWestland. The programme will provide the British Army and Royal Navy with 40 and 30 aircraft respectively, with an option for a further 10, split equally between Army and Navy. Future Lynx is described as a new aircraft that builds on the dynamic and vehicle systems of the existing design, incorporating advanced technology and providing increased capability. The first Future Lynx is programmed to make its maiden flight in 2009, with initial deliveries in 2011. The Army variant will enter operational service in 2014, with the RN variant following in 2015. 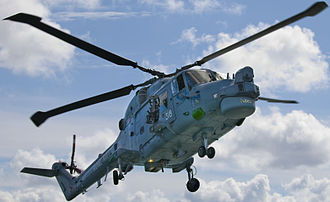 Certificate of Approval from GKN Westland.