The Boeing 737 is a short to medium range, single aisle, narrow body jet airliner. Originally developed as a shorter, lower-cost twin-engine airliner derived from Boeing's 707 and 727, the 737 has nine variants with the -600, -700, -800 and -900 currently in production. First envisioned in 1964, the 737 first flew in 1967, and entered airline service in February 1968. The 737 is Boeing's only single-aisle, narrow-body airliner currently in production, sometimes serving markets previously filled by 707, 727, 757, DC-9 and MD-80/90 airliners. The 737 has been continuously manufactured by Boeing since 1967 with over 6,000 aircraft delivered and 2,000 orders yet to be fulfilled as of March 2009. The 737 series is the most-ordered and most-produced jet airliner in history as of April 2009. There are over 1,250 737s airborne at any given time, with one departing or landing somewhere every five seconds on average. 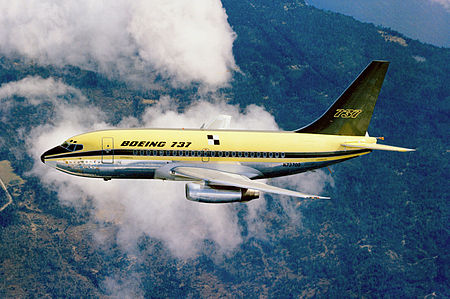