In 1982, British Aerospace (BAe) exhibited a mockup of the Agile Combat Aircraft (ACA) at the Farnborough Airshow as well as the Paris Air Show in May 1983. The ACA combined several years of private venture research by BAe, costing around £25 million, with similar studies done by MBB (in the TKF-90 project) and Aeritalia. Plans were made by the three companies to produce two technology demonstrator aircraft based on ACA under the name "Experimental Aircraft Programme".

The British Government announced it would make a financial contribution to the EAP but a lack of funding from the West German government meant that the planned second airframe was cancelled. The UK Ministry of Defence invested almost £80m in the EAP.

The EAP aircraft was built within the development facility (No. 2 Hangar) at British Aerospace, Warton; and comprised three major fuselage structures; front, centre & rear. The front fuselage contained many innovative structures in Carbon-fiber-reinforced polymer composites and aluminium-lithium alloy. The centre and rear fuselage structures were conventional, with a modified Tornado fin. The right hand wing assembly, manufactured at the Samlesbury plant of BAe, was a co-bonded carbon fibre composite assembly proving new tooling and manufacturing techniques which were put to good use later on the Eurofighter programme. The left hand wing assembly was manufactured at the Corso Marche facility of Alenia in Turin. The foreplanes were manufactured in carbon composite at Preston/Samlesbury; detail design and manufacture of the windscreen and canopy assemblies was done by Aerostructures Hamble, in Southampton. ZF534, the ACA demonstrator was rolled out on 27th October 1985. After extensive ground testing its first flight took place on 8th August 1986, going supersonic in the hands of Chief Test Pilot Dave Eagles

The Experimental Aircraft Programme was designed to research technologies to be used for a future European combat aircraft. The EAP was fitted with a variety of advanced electronic equipment, including three CRT displays and a HUD similar to the F-16's. Power was provided by a pair of Turbo-Union RB199-104 afterburning turbofans, previously used as the Tornado's powerplant. To reduce costs, the tailfin of a Tornado was used as the basis of the unit that was eventually fitted to the EAP prototype.

The aircraft contributed a wealth of flight data during a five year test period which ended on 1st May 1991. A total flying time of 195 hours 21 minutes was logged during 259 sorties. The EAP aircraft was retired from service on 1 May 1991, and was located in the display area of the Aeronautical and Automotive Engineering department of Loughborough University.

On 26 March 2012 the EAP left the Aeronautical & Automotive Engineering Department at Loughborough University following the RAF's request to have it displayed at the Royal Air Force Museum Cosford. 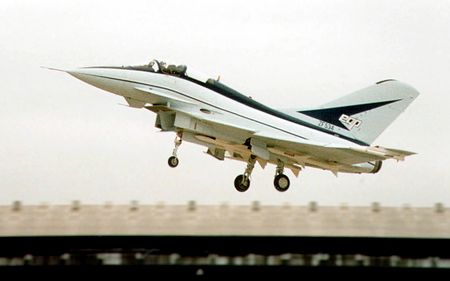 Controls for the Future