Ling-Temco-Vought responded to the VA(L) competition which was for a carrier-based subsonic light attack aircraft to replace the US Navy A-4’s with a design based on the successful supersonic F-8 Crusader aircraft produced by Chance Vought.  In March 1964 the company received a contract for the initial batch of aircraft, designated A-7. In 1965 the aircraft received the popular name Corsair II.

It was the first US aircraft to have a modern HUD which displayed information such as dive angle, airspeed, altitude, drift, and aiming reticle.The A-7 was also one of the first combat aircraft to feature a doppler-bounded inertial navigation system (INS), and a turbofan engine.

In 1967 it was announced from Dallas in Texas U.S.A that Elliott Flight Automation had been awarded a four year contract to supply LTV with Head Up Displays for the A-7. The initial contract was worth £14million for 1,200 displays and was the largest ever awarded to a British firm.

By 1970 the A-7D and A-7E began to move to squadron service, initially with the United States Navy during the Vietnam conflict and was then adopted by the United States Air Force to replace their A-1 Skyraiders that were borrowed from the Navy as well as with the Air National Guard. It was exported to Greece (in the 1970s), Portugal and Thailand (in the late 1980s).

Pilots were reported to say that “ they like it better all the time”. It was doubling the weapon delivery accuracy. Also in 1970 Elliott Flight Automation was awarded a Double Queens Award for both Export of all products and Technology of the Digital Head Up Display. In 1971 Vought Aeronautics Corporation donated a silver cup to be known as the Corsair Trophy in recognition of the Division’s achievements in designing, developing and manufacturing the A-7 Head Up Display. Much later in 1978 the Corsair Building was opened at Rochester again to note this very important programme.
The A-7 HUD was the breakthrough into the U.S. market and was the start of a golden era for HUD's; 2534 to of this design were made and build rates exceeded 30 a month at one time. 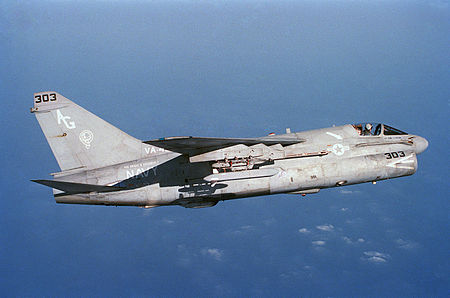 Model of Vought A-7

A-7 Head Up Display

The A-7 Head-Up Display (symbology)

Painting of A-7 Corsair

The A-7 HUD, EU and PDU shown by Colin Marshall

A-7 PDU undergoing test and alignment

A-7 TRAM VCU covers on

A-7 TRAM VCU covers off