The Lockheed Martin F-16 Fighting Falcon is an American multirole jet fighter aircraft originally developed by General Dynamics (GD) for the United States Air Force. Designed as a lightweight fighter, it evolved into a successful multirole aircraft. The Fighting Falcon is a dogfighter with numerous innovations including a frameless, bubble canopy for better visibility, side-mounted control stick to ease control while under high g-forces, and reclined seat to reduce the effect of g-forces on the pilot. It was also the first fighter aircraft deliberately built to sustain 9-g turns. It has a thrust-to-weight ratio greater than one, providing enough power to climb and accelerate vertically if necessary. The F-16 has a quadruplex (four-channel) fly-by-wire (FBW) flight control system The Falcon's versatility is a paramount reason it was a success on the export market, serving 24 countries.The F-16 is the largest Western fighter program with over 4,000 aircraft built since production started. Manufacture of the FSD F-16s got underway at General Dynamics Fort Worth, Texas plant in late 1975, with the first example, an F-16A, making its first flight in December 1976. The initial two-seat F-16B achieved its first flight on 8 August 1977. The initial production-standard F-16A flew for the first time on 7 August 1978.The F-16 was given its formal nickname of ?Fighting Falcon? in July 1980, and it entered USAF operational service with the 388th Tactical Fighter Wing (TFW) at Hill AFB that year. Two European production lines were established, one in the Netherlands and the other in Belgium with sub-assembly manufacture in Norway and Denmark.A further production line was established at Ankara, Turkey. The USAF bought 674 F-16As and 121 F-16Bs, with delivery completed in March 1985. Though no longer produced for the US Air Force, it is still produced for export and is scheduled to remain in service with the U.S. Air Force until 2025. The F-16A (single seat) and F-16B (two seat) were initially equipped with the Westinghouse AN/APG-66 pulse-doppler radar, Pratt & Whitney F100-PW-200 turbofan with afterburner. 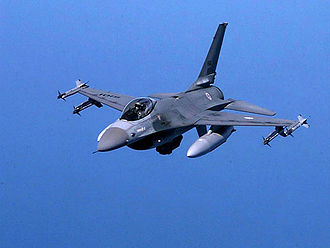 Birdstrike on Canopy and HUD System